Niels Lyhne Løkkegaard is a Copenhagen-based composer and interdisciplinary artist.

He considers his work to be a basic research in realities and is interested in how bubble-like systems unfold themselves as human conditions.

The meetings between individual bodies and different bubble-like systems are key drivers in Løkkegaards praxis and he's interested in how to escape these bubbles, and if not escape them, then how they can be warped, wrestled and renegotiated.

Løkkegaard is particularly interested in the notion of instrumentalization and what instruments can mean and what they can control and do. Hence he often works with music instruments not only as sources of sound but also as cultural markers embedded within different systems and hierarchies. This being a driver in Løkkegaards work has led into compositions of music that can be performed by musicians as well as non-musicians - all revolving around the focus on how to create a safe environment for performing music, and dissolve shame or trauma connected with a particular music instrument and the act of performing music in general.

Working with physical sound and even instruments

Since 2012 Niels Lyhne Løkkegaard has experimented with creating music that lets the instruments transcend their inherent sonic norms and reappear in another form. In the work series SOUND X SOUND (2013-2017) he explores this by way of multiplication which resulted in a series of works multiplying one instrument a number of times: One piece is written for 9 pianos, another for 18 clarinets, 10 hi-hats and so on.

The multiplication brings out new timbral phenomena, interference of sound waves and vibrations, and brings out what Niels Lyhne Løkkegaard calls the sound’s potential of transformation. He describes this as the quality in a musical piece, when you no longer hear recognizable instruments, but instead the individual sound, as well as the individual musician, is dissolved into the collective sound.

A sonic as well as human synthesis.

He explains the concept of this sound as follows:

"It’s a pretty simple concept, and it’s not that different from choir music. We’re so familiar with that. When you make a choir piece, the individual voice dissolves into this greater collage of sound. By listening to this timbre that evolved when instruments were multiplied, I found out that the sound suddenly became something else, and it became easier for me, as a listener, to go into this sound. You know that feeling as a listener, where a narrative is pulled down on you and there’s a clear agenda from the composer’s side – that you should feel this from the music? Suddenly, it dawned on me that I liked this multiplication sound because I was free from the individual instrument, the individual player and the individual reference within an instrument. I was free to create my own narrative in this music."

“Imagine you enter a room with vibrant acoustics, such as a cafe full of people having conversations, and when you’re close to those conversations you hear the language and understand the words. If you step away from the tables, however, and stand in the doorway, you begin to loose the ability to distinguish the words from one another. Now instead of hearing the individual conversations, melts all the conversations together, and transform into a one new sound. A sound of people without words and language. Just as when you hear a group of geese squawk, or the wind in tree tops, a kind of nature given sound of people. Once the language is dissolved and the words stop making sense, what is left, is the sound."

Løkkegaard also creates sound audible only for the inner ear of the listener, where written stories about sound manifest themselves as imaginary pieces of music or as soundless Potentials which evokes inner soundscapes within the listeners mind; a utopic space -a space of potentiality.

Løkkegaards Symphony No. 1 and Anthology of Sound both inhabit multiple states at the same time - being in constant fluctuation between alphabet, word, language and meaning - & between book, score, written text and imaginary music. The ancient cycle of sounds transforming into words transforming back into sounds is summed up by Marshall McLuhan who said that “Man was given an eye for an ear”, and Løkkegaard is hoping to give back an ear for an eye.

Niels Lyhne Løkkegaards  interest in how stories about sound can be accepted as being sound detached from any physical manifestation and how the narrative meta-sphere can be a space for artistic action in what could be described as curatorial times, has also lead Niels Lyhne Løkkegaard into creating Curatorium, a curatorial non- event that celebrates sound on an annual basis. Curatorium is a story about a sound-art festival that never takes place - a festival in between realities. Niels Lyhne Løkkegaard raises the question: When does something actually exist?

Music for the inner - an exploration of sonic potentiality - an artistic research project (conducted from 2017-2019 at RMC). 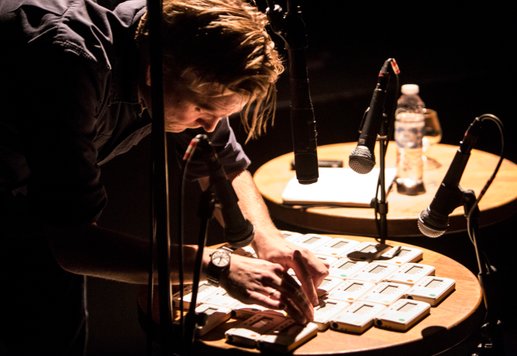 The work of NLL has been presented at a variety of different venues and museums such as MoMA (NY - as a part of the René Magritte exhibition The Mystery of the Ordinary), York Art Gallery, Imaginary West Indies (Overgaden Copenhagen), ISCM (Vancouver), Radiophrenia (Glasgow’s Centre for Contemporary Arts), CPH:DOX (Copenhagen), Roskilde Festival (DK), Harpa (Reykjavik), G((o))ng Tomorrow Festival (Copenhagen), Nordic Music Days (Norway), Akusmata (SF, 2020) and his works has been released on labels such as Topos (DK), Archive Officielle (CA) and Important Records (US). NLL is a

He is a founding member of the intermedial platform TOPOS, is associate professor at RMC in Copenhagen, and has given lectures at the California Institute of the Arts (CalArts), Simon Fraser University (Vancouver), The Royal Danish Academy of Music, Artistic Research Forum (N), Goldsmiths University of London a.o.p. NLL has been awarded with several prizes a.o. from the Danish Art Foundation, Danish Music Award (DMA) & the Sonning Foundation and Honorary Mention - Prix Ars Electronica.

Niels Lyhne Løkkegaard was educated from the RMC in Copenhagen and the School of Architecture at The Royal Danish Academy of Art.